The Brig AUSTRALIA
Background - Maiden Voyage - Ultimate Fate
The "New Brunswick Courier" (Saint John) reported on July 3rd, 1852 - "Another very strong and substantial brig called the AUSTRALIA was recently towed down from Quaco, where she was built by Mr. John Brown. She measures 178 tons N.M. and 209 tons O.M. This vessel has been purchased by a company of persons, who are fitting her out for the diggings. She is divided into 64 shares, and has nearly as many owners, and it is probable it will carry out over that number of passengers. There will be a complete second deck laid, which will be fitted up with berths and we have no doubt but that this will be an economical and comfortable manner for those parties proceeding to Australia." 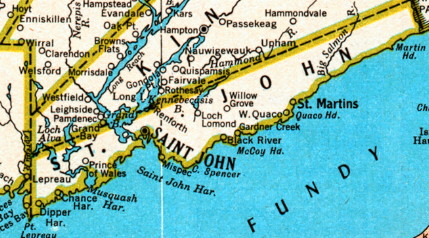 However, there are several anecdotal accounts of other passengers having shares in the AUSTRALIA. My father used to tell me about his grandfather, Joel Tompkins (passenger #31), being part-owner of the ship which brought him to Australia. On arrival, the ship was sold and "they all sat on the steps of the bank and divided the proceeds". In a short biography of William Hallad Davis (passenger #33) published in "Victoria and Its Metropolis: Past and Present" it states "He arrived in Victoria in 1852 by his own brig Australia, which was sold for 500 pounds". Tamberlane J. Campbell (passenger #62), his family and the Cunnabells went to New Zealand within a month of arrival and a 1953 newspaper article celebrating the centenary of their New Zealand sojourn states that "...in the early 1850s a small adventurous group captained by Tamberlane Joseph Campbell built their own ship and set sail for Melbourne. The name of the ship has been forgotten.... They arrived in Melbourne late in 1852. Some of the party were dropped in Australia while the rest sailed on for New Zealand". Further, the obituary for Robert Hazen (passenger #51) in the "Yarrawonga Mercury" (Victoria, Australia) of Nov. 30th, 1893 states that "Mr Hazen came to the colony in l852 or 1853 .... about forty or fifty young men of the neighborhood of Fredericston (sic) combined and purchased a vessel, equipped and manned her, and set sail for Australia ... They touched in at the Cape on the voyage out, took in a cargo of gin, which they brought to the colonies and disposed of at such profit as to enable them to defray all the expenses of the voyage ... The vessel was known as the "Brig Australia"".

The only known official list of persons on the maiden voyage of the AUSTRALIA is the un-dated 3-page passenger list which was prepared before the brig sailed. This list was accepted by the authorities at the end of the voyage and the original is kept by the Victorian Public Records Office in Melbourne, Australia. All efforts to date to locate a list of crew members on the brig have failed. So we cannot even be sure that everyone on the passenger list actually made the trip out, nor can we know if anyone else "caught the boat" at the last minute and was not recorded! Similarly, we have no official record of any births or deaths on board. But passenger #68, Alfred Campell aged 1, is supposed to have died en route to Australia. And it is certain that at least one baby was born during the voyage. Passenger #72, Isabella Seelye, was the wife of the AUSTRALIA's master, David Seelye (photo at right courtesy of John F. Seelye and Keith S. McKechnie), and the published genealogy of the Seelye family lists their son Norman as being born on November 2nd, 1852. When this baby died in 1854, the death record shows that he was born "at sea" and was 2 years old.

The AUSTRALIA was cleared to sail on August 7th, 1852 but departure was delayed until the following week. The "New Brunswick Courier" reported in its Saturday, August 14th issue:- "The brig Australia having on board about 70 passengers, the greater portion of them being young men, natives of this city and its vicinity, was towed out of the harbour by the steamer COMMODORE on Wednesday evening and sailed for the goal of her passengers' hopes and expectations on the following morning. From the fact that this vessel containing so many individuals connected with the City and Province, and many of them having a pecuniary interest in her, more than ordinary anxiety is felt for the success of the venture, and in common with others, we wish the good ship AUSTRALIA a speedy and prosperous voyage to the region from which she derives her name". So the departure date was Thursday, August 12th, 1852.

The following table sums up the research to date about the persons who are designated on the official passenger list cited above. The first column shows in alphabetical order each family group or individual with all details which were shown on the original list (added material is in italics). The second column lists entries found in available copies of the 1851 New Brunswick Census which seem to refer the persons in column one. Regrettably, the St. John County Census records are incomplete. In the final column you'll find information about the probable movements of individuals after arrival, based largely on the Victorian Birth, Marriage and Death Indexes on CD-ROM. Full certificates have had to be obtained to identify some individuals. In several cases, descendants of passengers have been located and much information is now available for particular families. With the release in 2005 by the Victorian Public Records Office of online records of outbound passengers from Victoria (1852-1861), it's been possible to identify several persons - who were probably brig passengers - leaving Australia; details are shown in green in column 3. And thanks to the LDS FamilySearch 1881 Canadian Census site it's been possible to locate records of several passengers who obviously returned home from Australia. Also, from various other census records and other sources, information has come to hand about the activities overseas of other passengers who had obviously left Australia. Details are also shown in green in column 3. Clickable links have been provided to contact researchers where permission has been gained for their inclusion. More links will be added as approval is received; for the present, click here for information on reaching anyone without their own link.
Available photos of passengers and/or their graves are indicated by the clickable camera icon

appearing in column 3. Six of the passengers listed below, indicated by the clickable CD icon

appearing in column 3,
have been included on a CD released in 2008 which details the lives of a great many people who came
to Australia from the US and Canada during the gold-rush years. Click on the icon for further details.

The total number of passengers shown at the bottom of the list is "69 Adults, 17 children, 3 infants"; this tallies with the 88 numbered passengers and the unnamed and unnumbered child of William and Maria Davis. As stated earlier, no list of crew members has been found, but obviously there had to be others on board to "run the ship". To date, aside from Capt. David Seelye, only three extra names have emerged - the ship's surgeon Dr. William Craig and John W. Squires - both listed in New Brunswick newspaper reports as being on the maiden voyage - and Norman Seelye, born during the voyage in November, 1852 . In fact, the report of Squires' participation consists largely of a letter he wrote home on February 12th, 1853. It is the most complete account of the voyage currently available. In part, it reads as follows - "We arrived on the 28th December, in 45 days from the Cape of Good Hope. We were 84 days to there and lay there 9 days, making 138 days from St. John. We had a good captain, mate, and crew, with an agreeable company of passengers, numbering 106 in the whole. We had very fine weather to the Cape. Passed close to the Azores and Cape de Verd Islands, but did not stop; the only land we made being the Island of Trinadad (sic), a lonely barren spot, without inhabitants...". This was not the Trinidad most people know, but Trinidade in the Atlantic about 700 miles off the coast of Brazil close to the Tropic of Capricorn; another small island, Martin Vaz, is nearby. Assuming that Squires counted correctly, we now have 106 souls on board, but have names for only 94 (incl. John Mailman). It's possible that some of the AUSTRALIA's crew may have transferred to the BELLE CREOLE, which took the Campbells and Cunnabells to New Zealand in January, 1853. The results of ongoing enquiries into this possibility will be added to this web-site in due course.

The final voyage of the AUSTRALIA is detailed in "New Zealand Shipwrecks" by C.W.N. Ingram - "On arrival at Lyttelton on May 27, 1873, Captain Rogers, of the brig "Scotsman", reported the foundering of the brig "Australia". On May 23, the "Scotsman" passed Cape Campbell in company with the "Australia", the wind blowing with gale force from the north-west. Late in the afternoon the wind fell light, then suddenly veered to the south-west and increased to a terrific gale. On board the "Scotsman" sail was shortened, but it was found necessary to bear up for Cook Strait, running in company with the "Australia", which had every sail flying. At 7 p.m. the "Scotsman" continued to run before the gale, Cape Campbell then bearing north-west, and at this time a green light was seen passing about a mile inside of the "Scotsman", and was believed to be the starboard light of the "Australia". Later, the gale abated, and the wind fell to a dead calm, and the "Scotsman" again rounded Cape Campbell. On the following morning a seaman aloft reported something floating on the lee bow, and two hours later it was seen to be the wreck of a ship. On inspection the wrecked vessel proved to be the brig "Australia". There was no trace of the crew, and the crew [of the "Scotsman"] having salvaged the wrecked vessel's mainmast, the "Scotsman" proceeded on her voyage. The "Australia", which was bound for Timaru with coal, probably struck on the reef near Cape Campbell, the wreck being later found a mile and a half north of the lighthouse. The "Australia", No. 30,407, was a brig of 162 tons register, built at St. Martins, New Brunswick, in 1852. She was under the command of Captain Francis Grey, and is believed to have carried a crew of eight, all told."

Thanks are extended to the many people who have assisted with information and referrals to compile the above material. Initially, R. Wallace Hale, the erudite commandant at FORT HAVOC (repository of all that it good in New Brunswick historical material) "came on board" and did the bulk of the census research and list preparation. And it was Gail Durant (with her interest in the ships of St. Martins) who inspired this web-site. Suzanne Lisson and Janice White have assisted greatly with research for a number of families, several right outside the scope of their own interests. Additionally, I must thank Ann Facey, Peter and Denise Wells, Bob and Collen Pounsford, Judy Milne, the late Daniel Johnson, Mark Bryant at UNB, Anne Brown, Judith Douthie, Shirley Bulley, Susan Hill, Kaye Patterson, Miss Agnes Dockendorff, Anna Dockendorff, Helen and the late Gerald Weekes & family, John and Frances Parnell, Marlene Gunn, Ray Hazen, Walter E. Hazen, John Simmons, Sue Tymms, Frances and John Towerton Judge, Lisa Rasmussen, Keith Berry, Chantel Neily, Wayne Neily, Gabrielle Charlton, Rhonda Scoullar, Marie Dickson, Marion Cadogan-Cowper, John F. Seelye, Keith S. McKechnie, the late Joan Kidwiler, Cheryl Condon, John B. Suffren, Harry MacDonald, Joy Timbrel, Lois Nicholson, David Weldon and my wife, Liz, and our family for their support.
Web-site prepared by Allan J. Tompkins of Koondrook, Australia
(a great-grandson of Joel Tompkins - passenger #31).
You are visitor number
Webpage launched August 31st, 2001. This is update number thirty-eight - August 14th, 2008.

Material is added to this site as it becomes available - please call back!

And please check our Home Page for details of our other webpages (genealogy, Country Music etc.)